In late 2018, I was lucky enough to be invited, along with my partner-in-life & thinking Kaajal Modi, to write a chapter for the Punctum volume:

Post-Memes: Seizing the memes of production

The book has now been published, and I can honestly say: It’s brilliant! You can see the book abstract here:

Art-form, send-up, farce, ironic disarticulation, pastiche, propaganda, trololololol, mode of critique, mode of production, means of politicisation, even of subjectivation — memes are the inner currency of the internet’s circulatory system. Independent of any one set value, memes are famously the mode of conveyance for the alt-right, the irony left, and the apoliticos alike,  and they are impervious to many economic valuations: the attempts made in co-opting their discourse in advertising and big business have made little headway, and have usually been derailed by retaliative meming. Post-Memes: Seizing the Memes of Production takes advantage of the meme’s subversive adaptability and ripeness for a focused, in-depth study. Pulling together the interrogative forces of a raft of thinkers at the forefront of tech theory and media dissection, this collection of essays paves a way to articulating the semiotic fabric of the early 21st century’s most prevalent means of content posting, and aims at the very seizing of the memes of production for the imagining and creation of new political horizons.

With contributions from Scott and McKenzie Wark, Patricia Reed, Jay Owens, Thomas Hobson and Kaajal Modi, Dominic Pettman, Bogna M. Konior, and Eric Wilson, among others, this essay volume offers the freshest approaches available in the field of memes studies and inaugurates a new kind of writing about the newest manifestations of the written online. The book aims to become the go-to resource for all students and scholars of memes, and will be of the utmost interest to anyone interested in the internet’s most viral phenomenon.

And the introduction to our peice “Socialist Imaginaries and Queer Futures: Memes as Sites of Collective Imagining” here:

Introduction: It was the memes wot dun it

On Friday 9th June, 2017, UK residents woke up to a state of serious uncertainty as to which political party, exactly, was in power. The subsequent days would see a reshuffling of the narrative into an apparently easy Tory win, and a smoothing over of the initial surprise at Labour having gained 36 seats (albeit having lost 6), but for one brief, shining moment, the left, under Corbyn’s Labour Party, had categorically Not Lost a General Election. So how, despite all of the punditry and expertise saying otherwise, had this happened? According to myriad editorials, opinion pieces and other forms of Serious Journalism, it woz the memes wot dun it.

An elderly, awkwardly sincere socialist had become the poster boy for the revolution. Jeremy Corbyn had arrived, and he was both a rockstar and your dad in a homemade cardigan. He had motivated a previously “apathetic” group of youth voters that everyone else had given up on. Corbynmania galvanised a generation of young people, and those young people had not only voted Labour, they had convinced their families to vote Labour, they had organised, and they had gotten out onto the streets and knocked on doors and convinced others to vote Labour. Here was the holy grail of politics.

Suddenly, memes were valuable currency. The Tories found themselves with a need to get in on the act by pretending that they had young new media-savvy members in their ranks and starting the thankfully short-lived Activate Twitter account (#meme, anybody?), and even hotly-tipped young pretender to the Conservative Leadership Jacob Rees-Mogg (48) got himself an instagram were he could post twee selfies of himself, presumably from his country estate in the 1920s.

While a tracing of the phenomenon of Corbynism and its many offshoots through online meme culture and into mainstream politics would be a worthy endeavour, by necessity it sits outside of the scope of this particular investigation. What we, as researchers and practitioners, are interested in is the potential for online memes to act as sites of intersubjective imagination and worldbuilding.

If you want to read the full thing, the book is available to purchase or on Open Access here. 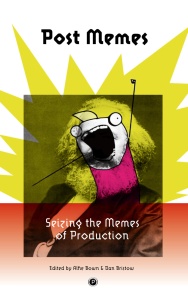